You are here: Home / Uncategorised / Serological evidence of SARS‐CoV‐2 and co‐infections in stray cats in Sp...
spotlight topic:

The authors noted that while the seroprevalence of SARS-CoV-2 in stray cats in this sample was low the existence of concomitant infections with other pathogens including T. gondii, L. infantum and FIV, may suggest that immunosuppressed animals might be especially susceptible to SARS-CoV-2 infection. 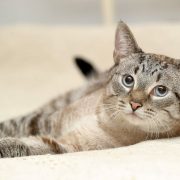 Pathogenesis, transmission and response to re-exposure of SARS-CoV-2 in domestic cats