You are here: Home / Editions / Apr2022 / Determining an optimum propofol infusion rate for induction of anaesthesia...
summary of: 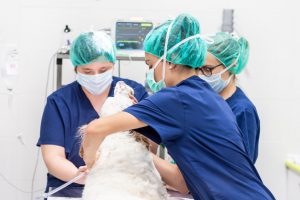 The aim of this randomised, blinded, clinical trial, carried out in a veterinary school hospital in the United Kingdom, was to determine an optimum infusion rate of propofol that permitted rapid tracheal intubation while minimising the duration of postinduction apnoea in healthy dogs.

Propofol administration was stopped once adequate conditions for tracheal intubation were identified, and the total dose administered was calculated. The duration of propofol infusion, time to intubation, and time to first spontaneous breath was recorded.

Sixty-two dogs were enrolled in the study, two dogs were withdrawn, one due to bradycardia following premedication and one due to cannula failure during propofol administration, leaving 60 dogs to be randomised – 12 per group. Tracheal intubation was successful at the first attempt in all dogs.

There were significant differences between the groups for mean dose of propofol, duration of apnoea and intubation time (p < 0.001, p = 0.017 and p < 0.001, respectively). The total dose of propofol administered was significantly less in group B than in groups C, D and E with no significant difference compared to group A. After controlling for bodyweight and sedation scores propofol infusion rate had a significant effect on duration of apnoea (p =0.004) and intubation time (p < 0.001).

Limitations of the study include the subjective assessments for determining when to stop the propofol administration and what counted as first breath.

This study provides some evidence that a propofol infusion rate of 1.0 mg kg-1 minute-1 offers the optimal compromise between speed of induction and duration of postinduction apnoea in healthy dogs. Further studies investigating the differences in methods of distribution of propofol (infusions or boluses) are required to identify whether the optimal induction dose varies depending on method of administration.