In Hong Kong, where pets belonging to owners diagnosed with COVID-19 have been quarantined as a precaution, information has been released on a small number of pets that have tested positive after contact with an infected human owner. As of 25th March, the Agriculture, Fisheries and Conservation Department (AFCD) had conducted tests on 17 dogs and eight cats from households with confirmed COVID-19 cases or persons in close contact with confirmed patients, and only two dogs had tested positive for the COVID-19 virus.

On 1st March, it was reported that a Pomeranian dog in Hong Kong had tested positive for SARS-CoV-2 and further testing, including gene sequencing, suggested that the dog had a low-level of infection and that this is likely to be a case of human-to-animal transmission1. The dog did not show any clinical signs of disease and following repeated testing and negative results was released from quarantine, however, the dog was reported to have died several days after release.

The AFCD first collected samples from the dog for tests on 26th February and detected low levels of SARS-CoV-2 virus from its nasal and oral cavity samples on 27th February. The Department repeated the test on 28th February and 2nd March and the dog’s nasal and oral cavity samples, and nasal samples respectively, tested weak positive for the virus. A blood sample was also taken from the dog on 3rd March for serological testing and the result was negative. The negative result indicated that there was not a strong immune response and that there were no measurable amounts of antibodies in the blood at this stage. Virus isolation was performed on previous samples taken from the Pomeranian with a negative result, indicating that no live virus was retrieved.

The Department, together with the School of Public Health of the University of Hong Kong, also conducted gene sequencing of the virus found from the dog and its close contact persons who were confirmed infected. The viral sequences were very similar, indicating that the virus likely spread from the infected persons and subsequently infected the dog.

Further details about the first two dogs to test positive to SARS-CoV-2 in Hong Kong have been published in Nature 3.

The paper confirms that the genetic sequences of the virus isolated from the two dogs were identical to those from their respective owners (although the sequences from the two households were different). This evidence supports the assumption that the dogs were infected by their owners.

The paper also provides a useful timeline detailing when tests were carried out. 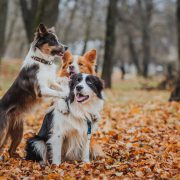