You are here: Home / Editions / Jun2021 / Melting corneal ulcers (keratomalacia) in dogs: A 5-year clinical and microbiological...
summary of: 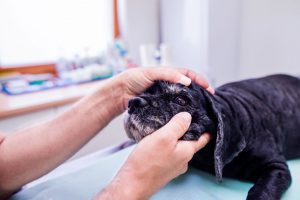 The aim of this retrospective study was to identify bacterial microorganisms associated with melting corneal ulcers (keratomalacia) in dogs and to investigate their prevalence, antimicrobial sensitivity, and clinical outcomes.

Medical records from a single UK referral hospital were reviewed for canine cases of stromal corneal ulcer associated with keratomalacia. Cases that had undergone bacterial culture and sensitivity testing were included in the study.

β-haemolytic Streptococcus showed the highest sensitivities to amoxicillin-clavulanate, cephalexin and clindamycin (100%), doxycycline (89.5%) and chloramphenicol (88%). β-haemolytic Streptococcus showed the greatest resistance to polymyxin B, neomycin and fusidic acid (100%), gentamicin (95%), and most were resistant to fluoroquinolones (enrofloxacin and marbofloxacin, at 63% and ciprofloxacin and ofloxacin, at 67%).

There was no significant difference in terms of ulcer severity at presentation regarding the cultured bacteria. Overall, 47 of the ulcers received only medical treatment and surgical grafting was performed on 63 eyes. The ulcers healed in 96 cases, and in 14 cases, progression of corneal melting resulted in enucleation. 57% (8/14) of the enucleated eyes cultured pure Pseudomonas aeruginosa isolates. In contrast, all β-haemolytic Streptococcus-associated ulcers healed.

Limitations of the study include the retrospective nature, clinical details were not fully documented in every case, and the duration of melting keratitis prior to presentation was unknown. As the study used records from a referral practice, the findings may not be generalisable to primary-care practices.

This retrospective study provides some evidence of the importance of bacterial culture and sensitivity testing for all dogs presenting with melting corneal ulcers, to assist clinicians in their treatment choices.

Although the study uses data from a single referral practice, the information it provides is useful and could be used in a first opinion practice where referral is not an option.

Read summaries of new research that have the greatest potential to positively impact patient care.

The 25th issue #inFOCUSJune21 is out now, check online or in your inbox: https://t.co/ahuVoKndda

Reply on TwitterRetweet on TwitterLike on TwitterTwitter
Load More...
Search