You are here: Home / Editions / Oct2021 / Outcomes of nine cats with urinary retention after sacrocaudal luxation...
summary of: 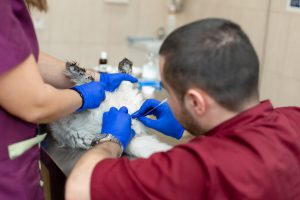 The aim of this retrospective case series was to document the outcomes of cats with urinary retention following sacrocaudal luxation managed by long-term cystostomy. The study was carried out at the ‘contributing institution’, which is taken to be the authors’ workplace, the Centre Hospitalier Vétérinaire St Martin in France.

The medical records of cats treated by long-term cystostomy (LTC) for urinary retention (UR) after sacrocaudal luxation (SCL) between March 2013 and December 2020 were reviewed. Cats were included if they had confirmed SCL within 48 hours of the traumatic injury; persistent UR after three days of ineffective inpatient conservative management using urethral relaxing agents; surgical LTC placement with owner consent, and follow-up period longer than three months or until spontaneous micturition recovery.

Nine cats were included in the study; the mean time for placement of the LTC was 4.5 days following SCL, all cats were clinically evaluated at least three times during their LTC use. The decision to remove the LTC was made when the cat achieved spontaneous micturition for a minimum of three consecutive days.

Limitations of the study include the retrospective nature, the small sample size, and the lack of detail on the cystostomy tube placement. It may also be confusing to describe this as long-term cystotomy as tube removal took place only 11-42 days after insertion.

This case series provides some evidence that cystostomy can be used as an alternative to manual expression or bladder catheterisation in cats with temporary urinary retention after sacrocaudal luxation. This method could allow for home-based management by the owner rather than periods of hospitalisation.

A double‐blinded, randomized, methylprednisolone‐controlled study on the efficacy of oclacitinib in the management of pruritus in cats with nonflea nonfood‐induced hypersensitivity dermatitis
0 replies

Impact of research on contagious ovine digital dermatitis on the knowledge and...

Factors that cause bandage complications in equines and how they can be res...
Scroll to top