This research letter reports on prolonged SARS-CoV-2 infection in a therapy cat from a nursing home in Germany which had 21 confirmed human infections (15 residents and 6 staff), including three deaths during a cluster outbreak starting in April 2020.

As part of the epidemiologic investigation of this outbreak the three therapy cats were also tested for SARS-CoV-2 by using conjunctival, faecal and oropharyngeal swabs. The cats were transferred to the BSL-3 animal facility at the University of Veterinary Medicine Hannover, for detailed follow-up. Cat K8, the close companion of one of the patients who died, was confirmed to be SARS-CoV-2 positive by quantitative real-time quantitative reverse transcription PCR.

The cats were housed together after the first four days and repeat testing at regular intervals showed that cats K4 and K9 remained negative, whereas K8 was positive for SARS-CoV-2 RNA until day 21 of surveillance.

The authors report that genomic sequencing supports direct human-to-cat-transmission during the first outbreak but not zoonotic SARS-CoV-2 transmission from K8.

It should be noted that more detail of epidemiological investigation and genomic sequencing is provided in the Appendix. 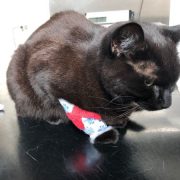 Pre-pubertal feline neutering: the role of the veterinary nurse in owner education