You are here: Home / Uncategorised / Detection of SARS‐CoV‐2 in respiratory samples from cats in the UK ass...
spotlight topic:

This paper expands on the information previously reported in Hosie, M.J. et al. (2020) , providing details of two cats confirmed to have been infected with SARS-CoV-2 in the UK, and expanding on details of the genomic sequencing, concluding that human-to-cat transmission of SARS-CoV-2 can occur, and that it will be important to monitor further transmission.

This paper reports on the retrospective analysis of feline oropharyngeal swabs submitted for routine respiratory pathogen testing at the University of Glasgow Veterinary Diagnostic Service (VDS) between March and July 2020.

This period coincided with the period when community transmission of SARS-CoV-2 was widespread in the UK.
Of the 387 oropharyngeal swabs submitted to the VDS for testing for respiratory pathogens (Feline calicivirus (FCV), feline herpes virus (FHV) and Chlamydia felis (C. felis) only one cat (designated cat 2 in the paper) tested positive for SARS-CoV-2 antigen. Any suggestion that cat 2 had been contaminated with SARS-CoV-2 from the owner was discounted as serum collected from the cat, 8 weeks after the initial sampling, tested seropositive in a live virus neutralisation assay conducted by an independent laboratory, confirming productive infection of cat 2.

The paper also reports on comparison of feline and human SARS-CoV-2 genome sequences using the viral genome from Cat 2. As the authors did not have the owner’s virus sequence, they used other human SARS-CoV-2 sequences, using data from the COVID-19 Genomics UK (COG-UK) consortium.

High throughput sequencing of the viral genome revealed five single nucleotide polymorphisms (SNPs) compared to the nearest UK human SARS-CoV-2 sequence, and this human virus contained eight SNPs compared to the original Wuhan-Hu-1 reference sequence. An analysis of the viral genome of cat 2 together with nine other feline-derived SARS-CoV-2 sequences from around the world revealed no shared cat-specific mutations.

The authors reported that analysis of the feline SARS-CoV-2 genome from cat 2 demonstrated a high degree of sequence conservation with genomes derived from infected humans and concluded that It is likely that all of the mutations in cat 2’s viral genome were also present in the owner’s virus, although the genome sequence of the owner’s virus was not available for comparison. 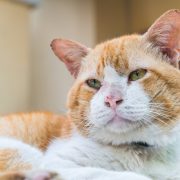 Cats vs. Dogs: The Efficacy of Feliway FriendsTM and AdaptilTM Products in Multispecies Homes

Investigation of SARS-CoV-2 infection in dogs and cats of humans diagnosed with COVID-19 in Rio de Janeiro, Brazil

Bias SARS‐CoV‐2 B.1.1.7 variant of concern detected in a pet dog and cat after...
Scroll to top