This paper reports on a small experimental study looking at the susceptibility of a range of domestic animals to the SARS-CoV-2 virus. In this experiment, ferrets were infected through intranasal administration of virus, and live virus was detected from nasal washes days 2-8 after infection.

Initially, two pairs of ferrets were inoculated intranasally with two strains of the SARS-CoV-2 virus. They were euthanised 4 days after inoculation and tissues were collected for viral RNA quantification by quantitative polymerase chain reaction (qPCR). Viral RNA and live virus were detected in the nasal turbinate, soft palate, and tonsils of all four ferrets inoculated with virus; but was not detected in any other organs tested, indicating that that SARS-CoV-2 can replicate in the upper respiratory tract of ferrets.

The researchers then inoculated a further 6 ferrets (2 groups of 3) with each strain of virus. Nasal washes and rectal swabs were collected on days 2, 4, 6, 8, and 10 post-inoculation (p.i.) from the ferrets for viral RNA detection and virus titration. Body temperatures and signs of disease were monitored for two weeks.

One ferret from each virus-inoculated group developed fever and loss of appetite on days 10 and 12 p.i., respectively. These ferrets were euthanised on day 13 and were found to have mild peri-bronchitis. Antibodies against SARS-CoV-2 were detected in all of the ferrets by an ELISA and a neutralization assay, although the antibody titres of the two ferrets that were euthanised on day 13 p.i. were notably lower than those of the ferrets euthanized on day 20 p.i.

The researchers then repeated the replication and transmission studies with 8-month-old ’sub-adult’ cats, juvenile cats (70-100 days) and 3 month old beagles.  The results were as follows:

Note: not all samples collected as difficult to handle

Finally, the researchers investigated the susceptibility of pigs, chickens, and ducks to SARS-CoV-2 by using the same strategy; however, viral RNA was not detected in any swabs collected from these virus-inoculated animals or from naïve contact animals.

The authors found that SARS-CoV-2 infects the upper respiratory tracts of ferrets but is poorly transmissible between individuals. In cats, the virus replicated in the nose and throat and caused inflammatory pathology deeper in the respiratory tract, and airborne transmission did occur between pairs of cats. Dogs appeared not to support viral replication well and had low susceptibility to the virus, and pigs, chickens, and ducks were not susceptible to SARS-CoV-2.

While this study does show that cats and ferrets can become infected with the SARS-Cov-2 virus, it is important to remember that this is a very small study and that the direct inoculation of virus intranasally may overestimate the risk of infection under normal conditions. It is also important to be aware that this study does not provide any evidence in regards to the ability of cats and ferrets to pass on the infection to humans or other species. 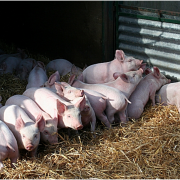 Transmission of SARS-CoV-2 from human to domestic ferret