You are here: Home / Editions / Aug2021 / Evaluation of Pexion® (imepitoin) for treatment of storm anxiety in dogs: ...
summary of:

Evaluation of Pexion® (imepitoin) for treatment of storm anxiety in dogs: A randomised, double-blind, placebo-controlled trial 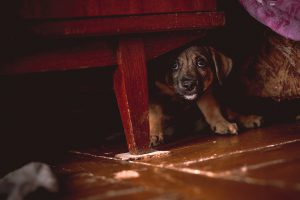 The aim of this randomised placebo-controlled, double-blinded study was to assess the efficacy of imepitoin for the treatment of storm anxiety in dogs. The study was funded by Boehringer Ingelheim manufacturers of Pexion® and carried out by the College of Veterinary Medicine, North Carolina State University.

Participants were recruited via social media and emails to local veterinarians. Interested owners completed a pre-screening questionnaire to assess eligibility for inclusion. To be included, dogs needed to be between 1- and 12-years, weigh between 2 and 50 kg, have a history of storm anxiety and score ≥ 30 on the Lincoln Sound Sensitivity Scale. The study consisted of a baseline period in which owners completed a minimum of two logs for storms their dog was exposed to. The storm logs recorded the duration and intensity of the storm, and an owner assessment of the intensity of their dogs’ behavioural signs on the Lincoln Sound Sensitivity Scale. Following completion of the baseline period, dogs were randomised to receive either imepitoin or placebo for a 28-day period during which owners completed storm logs for each storm observed. Owners also completed a weekly online survey in which they rated the frequency and intensity of behavioural signs to storms and reported any adverse reactions. At the end of the study, owners completed a seven-question survey on their impressions of the treatment received.

Forty-five dogs were enrolled on the study, 30 received imepitoin and 15 placebo. Results of the weekly survey showed that both treatment with imepitoin and placebo were associated with a decrease in signs of storm anxiety based on owner-reported assessment compared to baseline. However, imepitoin was significantly superior at week two and week four in the storm logs and weekly surveys, and in the two efficacy questions at the end of study survey.

Limitations of the study included the small sample size, the reliance on owner rating of behaviours and the unpredictability of storm events, which mean the number of exposures could not be controlled during the study period.

This study provides some evidence that twice-daily administration of imepitoin decreased owner-reported anxiety scores in dogs with anxiety of storms. Given the high rate of adverse events, further studies that evaluate whether lower dosages provide similar efficacy are required.

What is the efficacy and safety of an anti-nerve growth factor antibody (frunevetmab) for the treatment of degenerative joint disease-associated chronic pain in cats?

Efficacy and Safety of an Anti-nerve Growth Factor Antibody (Frunevetmab) for the Treatment of Degenerative Joint Disease-Associated Chronic Pain in Cats: A Multisite Pilot Field Study | in FOCUS https://t.co/R4OUIBMApC #inFOCUSissueAugust21 via @RCVSKnowledge

Natural infection by SARS-CoV-2 in companion animals: a review of case reports and current evidence of their role in the epidemiology of COVID-19