You are here: Home / Editions / Dec2022 / Prevalence and clinical significance of heart murmurs detected on cardiac...
summary of: 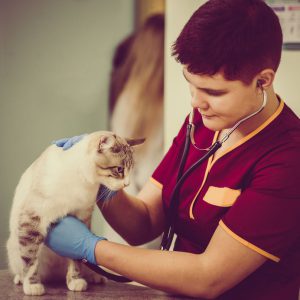 The aim of this retrospective study was to identify the prevalence and clinical significance of heart murmurs detected during routine physical examinations in cats. In addition, the study sought to determine the echocardiographic identification of the flow turbulence responsible for the murmurs and to identify patient and murmur characteristics that might predict a diagnosis of significant congenital or acquired cardiac disease.

A total of 856 cases were included in the study. The electrocardiographic findings revealed that 91.4% of cats sustained normal sinus rhythm. The majority (98.7%) of the heart murmurs were systolic, 56.7% of cats displayed a soft murmur, and the point of maximal intensity was described as sternal (or ‘both parasternal’) in 38.3% of cases.

The most common cause of heart murmur was systolic anterior motion of the mitral valve (SAM) (39.2%), followed by dynamic right ventricular outflow tract obstruction (DRVOTO, 32%), and flow murmurs (6.9%). Murmurs in 56.7% of cats were not associated with any structural cardiac abnormality. 56.1% of cats with SAM and 85% of cats with DRVOTO did not display any structural abnormalities on echocardiographic examination.

Limitations of the study were its retrospective nature, that information on the use of cardioactive drugs was not available in many cases, and that different clinicians carried out the diagnosis and management of the included cases which may have affected the results. The study was carried out at referral practices; therefore, the study population may not be representative of that seen in first opinion practice.

The study provides some evidence that while some heart murmur characteristics (timing, intensity, and location) can only occasionally discriminate between normal cats and cats with underlying cardiac disease, those with loud (mostly systolic) and palpable murmurs are inevitably associated with significant heart disease. These findings will help veterinary surgeons discuss the prognostics of heart murmurs found in cats on clinical examination.

Cats vs. Dogs: The Efficacy of Feliway FriendsTM and AdaptilTM Products in Multispecies Homes

A survey of sheep and/or cattle farmers in the UK shows confusion over the diagnosis...
Scroll to top