You are here: Home / Summaries / Farm Animals / Risk of iatrogenic damage to the sciatic nerve in dairy cattle
summary of: 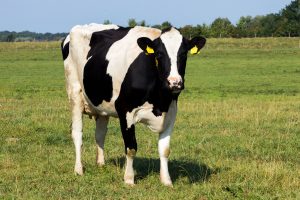 Damage to the sciatic nerve in cattle can lead to pain, lameness, and paralysis and therefore is a cause of concern for both welfare and productivity. Clinical texts indicate that sciatic nerve damage can be caused by intramuscular injections into the gluteal region with recommendations that gluteal or caudal thigh regions are not used for intramuscular injection in thin or young animals.

This study aimed to describe the position and depth of the sciatic nerve within the dorsal gluteal region of dairy cattle, and to evaluate the risk of damage to the sciatic nerve caused by intramuscular injection at this site.

A sample of five cattle hind quarter cadavers were used. The first cadaver was used to develop and test the methodology. The remaining four cadavers were allocated a body condition score (BCS) ranging from 0 to 5, using guidelines for body condition scoring of live animals and were used to map the position of the sciatic nerve and location of the injection sites. This was done by dividing the gluteal region into standard-sized squares using a wire grid which was secured to the cadaver in such a way that it could be moved away from the cadaver whilst the injections were taking place.

Fifty-four volunteers, all of whom had injected the gluteal region of a live cow at least once, took part in the study. All participants completed a questionnaire, which included questions about associated risk factors, prior to performing the injections.
Participants were asked to select the needle size that they would use to inject the maximum permissible volume of an antibiotic into the dorsal gluteal region and to inject two cadavers as they normally would. Needle size was recorded and the injection site identified by lowering the grid over the gluteal region and recording which square the needle hub was in.

To assess the variation of needle placement in an individual, two participants, both veterinary surgeons with considerable experience of injecting cattle, were each asked to repeat the procedure 10 times.

A proximity measure categorised as 0 (where the needle was placed directly over the sciatic nerve), 1 (where it was within one grid square either side), or 2 (where the needle was more than one square from the nerve) was used. The vertical distance from needle tip to sciatic nerve was calculated for needles placed in category 0 by subtracting needle length from the tissue depth measurement. A high risk area for injection of ≤ 50 mm from the nerve was specified.

The cadaver BCS ranged from 1.5 to 3.5. The sciatic nerves measured were all flat (< 5 mm thick) and had widths ranging from 35-45 mm. The shallowest point between skin surface and nerve was where the sciatic nerve emerged from the sciatic foramen (25-70 mm), and the deepest was where the nerve changed direction at the coxofemoral joint, with the depth corresponding to the BCS of the cadaver.

Results of the questionnaire revealed that 38 (of 54) respondents used the rump as their most commonly used injection site. 69% of needle placements were in the high risk area, 51% of these were in the cadaver with the lowest BCS. Overall 46% of needles were in proximity group 0 and 87% were in group 0 or 1. When the same participant repeated the exercise multiple times, there was variation in needle placement within an area of 39 cm2 for one participant, and 29 cm2 for the other.

Limitations of the study included the use of cadavers and the small sample size.

This study shows that iatrogenic damage to the sciatic nerve could occur from intramuscular injection in the dorsal gluteal region. Cattle of moderate-to-low BCS have a higher risk of iatrogenic sciatic nerve damage as they do not have sufficient muscle mass for a safe injection. Concern is also raised by the use of large dosage volumes, longer needles, and variation of needle placement site.

A practical solution to avoiding sciatic nerve damage would be to alter injection practices and to use the neck as the recommended site; however this is not practical if a headlock (rather than a crush) is used for restraint. When prescribing or dispensing medicines vets should promote the use of the neck as the recommended site for intramuscular injections and educate clients on the risks associated with injections at other sites.